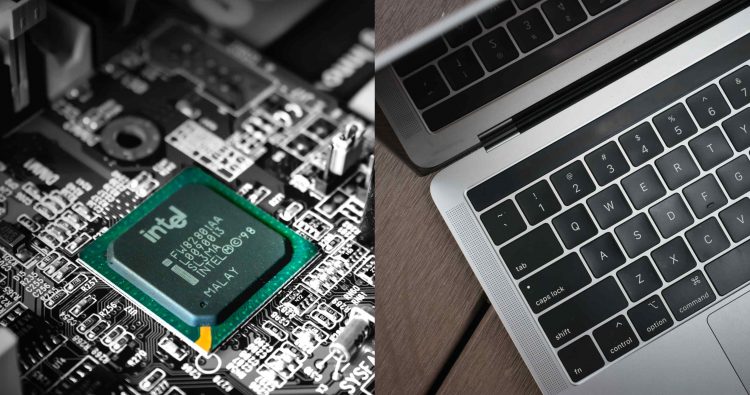 Intel has aimed at Apple, bragging that its brand-new 11th Gen Intel Core i5 H-Series outperforms the internals of the 16-inch Macbook Pro.

Intel’s assault, as Digital Trends pointed out, backfired. It turns out the i9-9980HK processor within the Macbook Pro is Intel’s own CPU.

Apple has remained silent throughout Intel’s campaign to shift attention away from the brilliant M1 processor. Still, if it did speak up, we could expect them to throw lines like, “ yeah, we do realize the CPU is inadequate, that’s why we switch to M1 chip!” this will straight up destroy Intel.

While attempting to insult Apple, Intel disses itself.

A PCGamer slide titled “ The best Mac laptop gaming can’t keep up” has also been shown by Shrout. Intel also included a graph comparing an “Intel-branded system” to a 16-inch MacBook Pro. the former comes with an Nvidia GeForce RTX 3060 GPU, and the latter one has an AMD Radeon Pro 5600M GPU.

Unsurprisingly, the MacBook Pro was trashed in every gaming benchmark. It’s not a secret anymore that Macs aren’t designed for gaming, and even with M1, they still aren’t.

However, there’s still something wrong with this picture.

First, as Digital Trends pointed out, GPUs are no processors; they are the real measure of gaming performance. Second, Intel bragged that their new CPU outperformed the processor in the MacBook Pro, which led to another puzzle: the MacBook Pro has an Intel i9 chip. How is a comparison of Intel vs. Intel meant to discredit Apple? Intel, as the expression goes, chopped off its own nose to spite its face.

Even though Intel’s graphic targets Apple, the Cupertino-based tech behemoth would certainly agree with the chipmaker: Intel just doesn’t cut it. Apple’s decision to ditch Intel favors the M1 CPU chip as a “game-changer” and a “big leap forward for the Mac” at WWDC 2020.

The zippy performance of the M1-equipped MacBook Air and 13-inch MacBook Pro impressed us with their speed. And possibly for a good reason, Intel didn’t compare any of its new 11th Gen Tiger Lake H-series with Apple’s M1 chip.

Can You Play Overwatch on Mac?